Capes on the Couch Blog,Marvel Musings on Moon Knight

As indicated in the episode, Moon Knight is one of my top two favorite comic book characters of all time (Captain America is the other). And as it’s a lot easier to be a completist for Moon Knight than Cap, that’s what I’ve strived for. Since I have every single solo issue of his, plus a number of appearances in other books and variant covers, I would posit that I have one of the largest, most comprehensive Moon Knight comic book collections in the world. That and a quarter won’t buy me a cup of coffee, but it’s something. In any event, I felt the podcast was insufficient for me to fully explain my history and love of the Lunar Legionnaire, so this blog post is going to cover my top 5 Moon Knight experiences/stories, in the hopes that documenting my passion for the character helps temper it somewhat. (Doubtful, but I’m willing to try.)

#5. Finishing the first draft of the screenplay

I mentioned in the episode that my love of Moon Knight derived from the research I did to write a screenplay about him, in the hopes of submitting it to Marvel Studios and having them make a trilogy of films on the character. I plotted out a trilogy of films, with an overarcing story for Marc, Marlene, Crawley, et al, and got to writing a full-length screenplay for the first film. (I figured I could pitch the first film, and while I had their attention I could mention where I wanted to go with 2 and 3.) October 25, 2010 I finished a 96 page draft – I knew it wasn’t perfect, but as I held the pages in my hands, I felt an overwhelming sense of accomplishment. I’m not known for finishing most things I start; I get a great idea and begin with a head of steam, but it dies down and I move onto the next great idea. The screenplay isn’t that much different – I finished the fourth draft in 2011, and haven’t touched it since – but at least it’s done on some level. Every so often I read a report that Moonie’s getting a film or (more likely) a Netflix series, and I wonder how similar it will be to my film that will never see the light of day. Maybe I’ll make a fan film, if I get enough of a budget to blow on it.

My MK collection was large by December 2015, but it wasn’t complete. I was still missing the piece de resistance – his debut appearance in Werewolf by Night #32. I somehow got hold of #33 a few years back, as the back half of the two-parter, but the expense of the debut meant I wasn’t getting it without spending serious coin. When I met my now-wife, apparently one of the earliest conversations we had centered around my love of MK, and how I was missing his debut issue. God bless her, it stuck in her brain, and for our first Christmas together she got me a (admittedly less than stellar quality) copy of WBN #32. I was finally able to read on actual paper what I’d only seen digitally and in reprints. It’s not better than a CGC 3.5, but I don’t care – it’s mine, and it was given with love. Even if I eventually have enough money to buy a good quality version, that one will always be special to me.

#3. My many commissioned pieces of Moon Knight

One of the great things about Moon Knight is that so many incredibly talented artists have taken their turns portraying Moon Knight, and each of them has their own unique spin on him. In my office currently hang FIVE different pieces of artwork. Four of them were commissioned (one is a poster print), and of those four, I got three of them at the 2012 New York Comic Con. Bill Sienciewicz – the master. This was the first sketch I asked for, because I knew I had to start with him. Simple yet elegant, he set the standard for what MK looks like even to this day. Bill’s a great guy, too, and even after all his years in the business he still has a kid-like energy to him. It’s infectious at cons. David Finch – the artist responsible for “The Bottom”, one of my favorite stories. He draws a brutal, savage MK – different than Bill’s, but just as iconic. And it takes him no time at all, which is the amazing thing. I couldn’t draw this if you gave me a year. Avery Butterworth – the dark horse. I stopped by Andrew Charipar’s table and talked to him, because I liked his style. So I commissioned a piece from him. After I left, Avery (who shared a table with Andy) said “Well I can draw Moon Knight too.” When I came back the next day, Avery had left this incredible rendition with Andy. Andy offered me both pieces at a discount (since I technically didn’t commission one from Avery), but when I saw it I knew I had to have it. Andy’s version was great, but Avery’s is on another level. He captured the essence of the character in a way I never envisioned.

I’d debated cosplaying for years, and when I finally made up my mind to do it at the 2014 NYCC, there was no question who I was going to be. The only question was which version of MK, and with Declan Shalvey’s redesign of the costume, it made it easy. So I worked on the costume for months, designing the armor and cape, cutting and sewing all over the living room floor. Friday I went to Declan’s table and told him I’d be stopping by the next day with a surprise – he seemed excited but apprehensive (I would be too if I were him haha.) Saturday at NYCC rolled around, and I was ready. It was a fun experience walking past fans who wanted their picture taken with me, but I wanted my picture taken with one man in particular. As I approached Declan’s table, he stood up with a giant grin on his face, and came out from behind the table. He wanted a picture with ME. After the handshake, he asked if I could take a picture “pretending to break [his] wrist”. Suuuure, why not. I tweeted it and tagged him in it, saying if he couldn’t draw Moon Knight anymore, he wasn’t gonna draw anything else (this was right after it was announced he was leaving after issue #6). He retweeted it, and next thing I knew my Twitter notifications blew up – Jordie Bellaire RT’d it, then Dan Slott, and everyone who was even remotely interested in MK or comics saw me “hurting” Declan. To this day, when I see him at NYCC, he remembers me as the guy who cosplayed as his MK. Declan, if you read this, know that you definitely made my con, and you’re an awesome guy. (And follow him on Twitter too!)

#1. Ron Garney gives me a lesson on comics One of my all-time favorite MK story arcs is “Scarlet Redemption” from Marc Spector: Moon Knight #26-31. I could turn it into its own blog post, but I won’t, since this is already too long. Suffice to say the story, the dialogue, and the art, are incredibly enveloping, and the use of the medium to contrast the love that Scarlet and Marlene have for Marc (in their own ways) is unique, and simultaneously means this arc cannot be translated to live-action. Ron Garney’s work is nothing short of masterful. He was making an appearance at the Marvel booth at the 2013 NYCC, and I knew I had to meet him to thank him, and get his autograph. He was near the end of the table, and as I waited in line, it was apparent that the guests ahead of him were drawing much more attention (I don’t even remember who they were). I asked if I could skip past to get to Ron, and the other con-goers were gracious enough to let me pass. I introduced myself, and asked him to sign the issues. He signed the first one, started to sign the second one, and paused. He said “ya know, I haven’t looked at these since I drew them” (and the issues came out in 1991, so we’re talking 22 years later.) He starts flipping through them, and begins telling me his inspiration for particular panels, what he was trying to accomplish through action, essentially a behind-the-scenes retelling of a 22 year old comic book that I’m certain no one else loved as much as me. For five whole minutes Ron Garney spoke to me about this arc. And for five whole minutes the Javits Center was entirely empty of people except for the two of us. He finished his lesson and signed all the books, we took a picture, and I floated away. I’ve had countless great experiences at comic conventions, but nothing will ever match the moment that Ron and I had, and all because he found someone who shared his appreciation and love of a particular story arc. Thanks Ron for your work, and taking the time to talk to me – I’ll never forget it as long as I live.

If you managed to read the whole thing, kudos to you. I hope I was able to convey in some small way how much Moon Knight means to me, and the impact that these experiences have had on me over the years. As Wil Wheaton said, “being a nerd is not about what you love; it’s about how you love it.”  I only hope that each and every one of you reading this finds something in your life, however small it may be, that gives you the joy that Moon Knight gives me, and that you share your passion with others. Thanks everyone,
Anthony

1 thought on “Musings on Moon Knight”

Ariel's back with another Longbox View, this time asking the not-so-simple question: what makes a villain? Read now to find out!

For the Longbox View #9, Ariel asks the simple question: is Batman bad for Gotham? 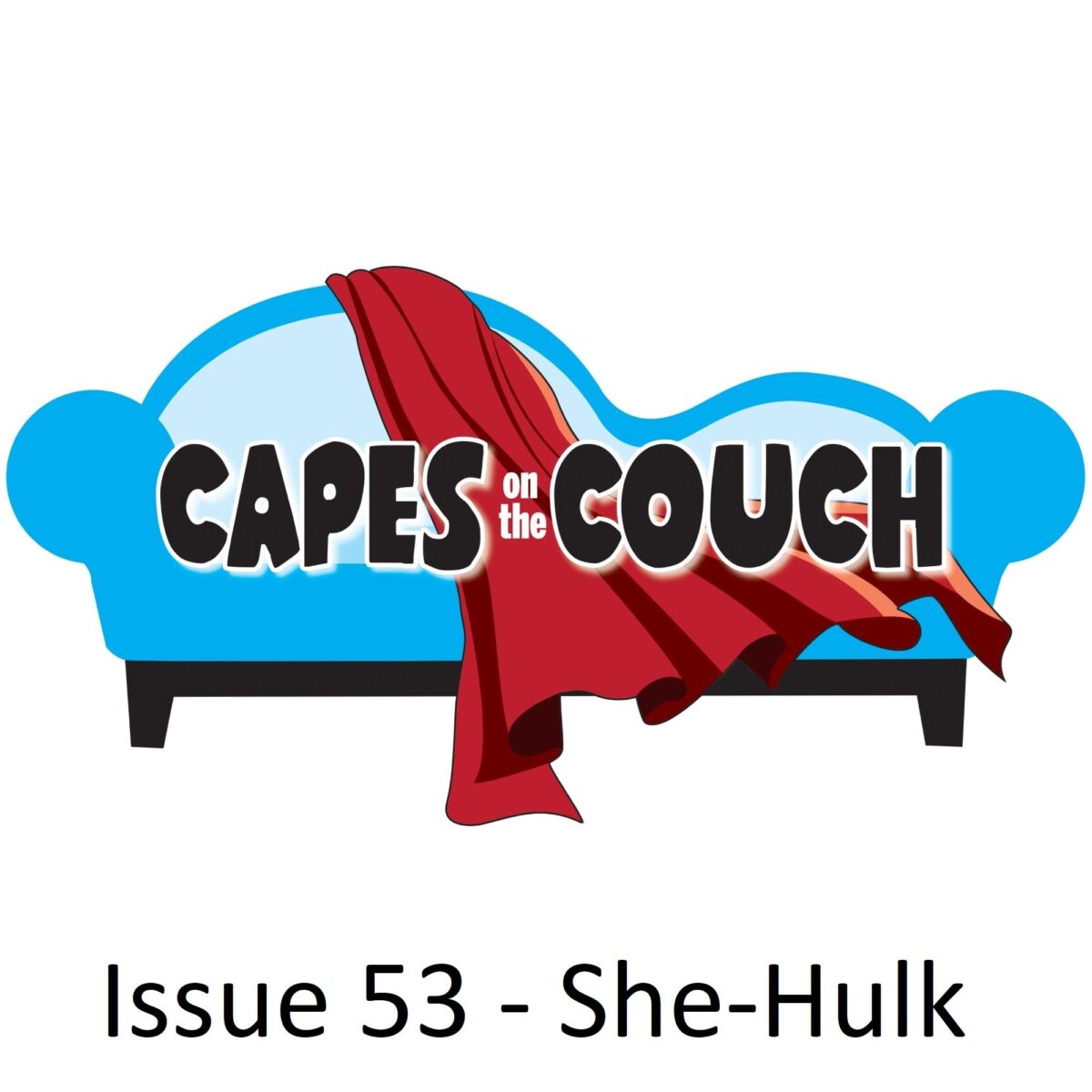 Patron Ruby requested we cover Jen Walters, aka SHE-HULK! Why does a successful attorney prefer to be green? Why does she keep relationships short & easy? Plus another five-star review