Since the debut of Moon Knight last week, I’ve received several requests asking me when I was going to give my thoughts on the show. You know how long I’ve been waiting?

Since August 23, 2019. Not many moments are seared into my brain, but I can recall with precise specificity where I was and what I was doing when I learned there would be a Moon Knight series on Disney+. I was sitting in my son’s room while my wife was feeding him and rocking him to sleep. Sitting on the floor, my phone started buzzing like crazy, because the announcement had just been made, and social media was doing what social media does – creating trending topics on Twitter. I checked my phone, because sitting in the dark with them was not the most thrilling thing in the world, and when I saw my notifications, I started jumping up & down and whisper-yelling. After my wife threatened to decapitate me if I woke up a 4.5 month old baby, I left the room and immediately began reading everything I could. I also checked in with my fellow Loonies to gauge feedback and interest. Needless to say, it was quite a thrill to hear, and I was on pins & needles, waiting for some any leak or confirmation of a release date.

Then the trailer dropped. I wasn’t going to sit through a football game I didn’t care about just to watch the trailer, but I knew it would be online within seconds of airing on TV. I sat in my office, on the computer, waiting for the footage on YouTube.

I waited over ten years of MK fandom, and over two years after the formal announcement of the series, for THAT?!?! The voice? The costume? The… whatever the hell Ethan Hawke was doing? I said in the Into the Knight Discord channel that I felt nausea in the pit of my stomach, and equated it to how longtime Fantastic Four fans must have felt after the 2015 Fant4stic crapfest. In the days that followed, I tried to explain my dissatisfaction to people, along with my fandom bonafides, and said that I was fine with other people enjoying it, but it wasn’t any version of Moon Knight that I recognized. (I was also accused, not unfairly, of gatekeeping; the insinuation being that I was a “true” MK fan and everyone who enjoyed it didn’t “understand” him.) My concerns stemmed from the fact that he has a simple but recognizable costume & origin story, along with his alters/identities, and nothing in the trailer struck me as faithful (with the exception of Khonshu, who looked riveting and horrifying as well he should). I was under the impression that since Moonie wasn’t/isn’t well-known among the general public in a way that Spider-Man/Cap/Wolverine et. al. are, Marvel felt it was acceptable to change his character to make him more suitable for mass consumption. I felt betrayed, annoyed, and angry. I was going to watch the series, but it was going to take a lot to convince me that Oscar Isaac and company knew what they were doing.

Long story short: I’m still not entirely on board. What I will say is that this single episode is a compelling hour of television. Oscar is a dynamite actor, able to reveal depths to his character(s) with minimal dialogue. I appreciate the completely different physical changes he brings to Steven and Marc, to say nothing of the voice – it harkens back to the Christopher Reeve Superman movies in the way he played Clark & Superman. Khonshu is still a force, and F. Murray Abraham’s vocal performance isn’t exactly what I have in mind when I read him in the books, but it’s not so far afield that it’s jarring – he definitely is amping up the petulant dickish nature that has become Khonshu’s calling card over the past few years.

And the way the show portrays the time jumps while Steven blacks out and comes to is the greatest storytelling conceit the MCU has ever used to date – it allows them to “show not tell” while simultaneously not showing anything. (It also allows them to get incredibly violent without depicting the violence in action. “MoOn KnIgHt NeEdS vIoLeNcE…” Moonie isn’t the Punisher nor Spider-Man, but try telling anyone whose only exposure to MK is the Huston/Finch run that wanton violence isn’t inherent to the character. Go back and read the OG Moench/Sienkiewicz run – you can do an entire series with those stories and barely scratch a PG-13 rating.)

My biggest complaint is that it seems that Jeremy Slater/Mohamed Diab/Oscar Isaac/etc. had a very specific story they wanted to tell about a man struggling with mental health issues. And from all accounts, it looks to be a fascinating story. But I would rather they tell an original story, and go where they want to go (or where the story organically compels them), than try to cram the story into a Moon Knight box. It’s as though they wrote the story a while ago, and when they signed on to do MK, they dusted it off, made a few changes, and called it a Moon Knight show.

There’s nothing recognizable whatsoever about Steven Grant in this series as compared to his comics rendition. Steven is the “cool” alter, the suave one, the Hollywood schmoozer. (Make one comparison to the Distinguished Competition’s orphan with a Chiroptera fetish and his alter ego, and I’ll slap you.) This version of Steven is every Hugh Grant caricature come to life.

Arthur Harrow encapsulates my complaint perfectly – a completely original character who happens to share the name with a one-off villain from a single comic. Ethan Hawke is a fantastic actor, and I’m glad he’s likely getting more money from this series than he’d make in a lifetime of Linklater movies. But again, nothing about this says Moon Knight.

And lastly, the costume. Look, Moon Knight has had some awesome costumes over the years, drawn by some legendary talents – Sienkiewicz, Finch, Maleev, Shalvey, Smallwood. Whether it’s the classic all white/silver getup, the roided out Finch version with the spiked gauntlets, the Shalvey redesign with the black base and white accents, or even the Mr. Knight snazzy suit, it’s immediately apparent who’s wearing it. What I saw at the end of this episode should have been called Sailor Moon Knight. Or Ragman. I was half expecting a camera rotation around him while the costume enveloped him, and he finished with a peace sign and “YATTA!”

If you’re looking for a rating, lemme break it down like this. As a series premiere of a show about a man with dissociative identity disorder, I give it a 8.5/10. As a show about Moon Knight, I give it a 3/10.

Doc reviews how good of a leader the Governor from the Walking Dead would be in real life. SPOILER: Not great.

Ariel's back with another Longbox View, this time asking the not-so-simple question: what makes a villain? Read now to find out! 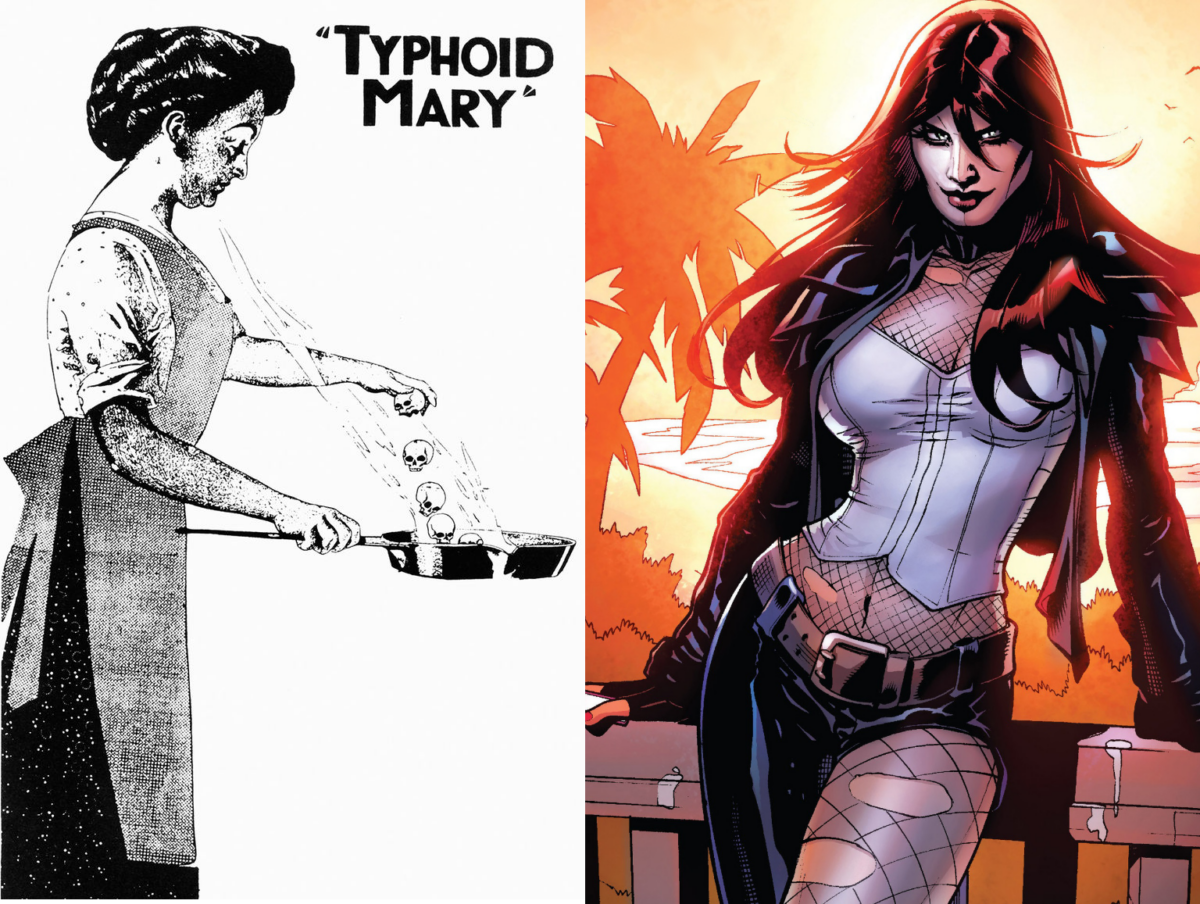 Doc compares the historical Typhoid Mary to the comic portrayal. It doesn't go well for anyone, least of all Doc.